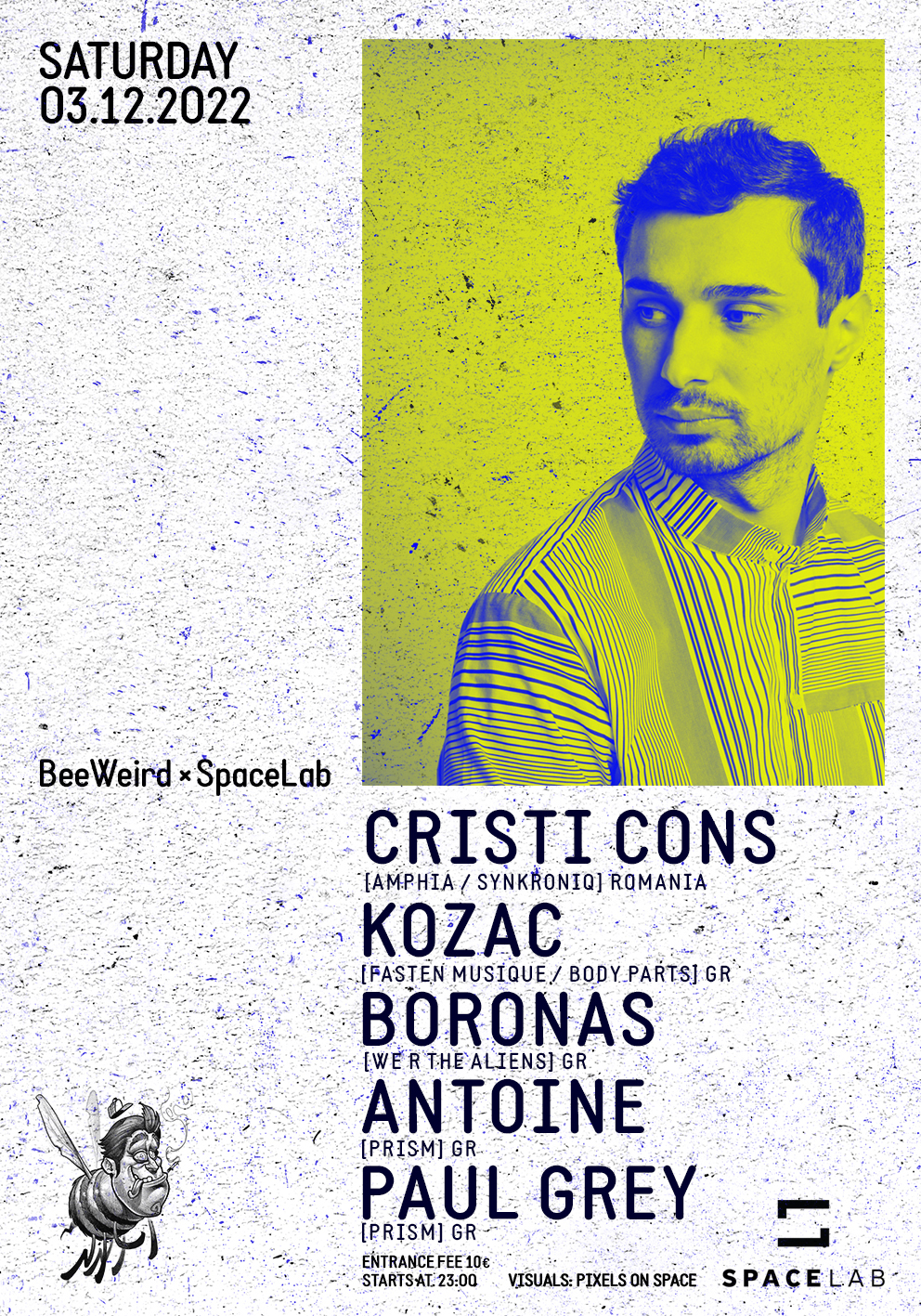 LINE UP
Cristi Cons (Amphia,Synkroniq) RO
”Electronic music became of interest to Cristi Cons In his early twenties, as before then, ever since he was a child, he has been studying the cello and was constantly surrounded by classical music.
When arrived in Bucharest, Cristi was introduced to a new music genre that not only had caught his attention, but it became an exploratory territory where he would later on develop a very deep and special sounds. From mixing to music production, most often alongside his fellow Vlad Caia, under the SIT alias, the artist has always challenged himself to be more productive, more creative and look outside the usual patterns that other musicians are tempted to adopt.
Through hard work and constant passion for creating more, he became one of the founders of AMPHIA, a label that explores both the musical and visual journey, and nonetheless, he continues to amaze crowds in Europe and across its borders with sets full of emotion.”
https://linktr.ee/cristicons
Kozac (Fasten Musique,BodyParts) GR
”Right in the mid of 2018, Greek groovers Grush and DJ Dest decided to join their forces under the Kozac project.
The Thessaloniki-based duo’s aim is to smash the musical boundaries, bringing a fresh and innovative boost to the local electronic music scene.
Their first track ‘Raveani’ released on BodyParts Records and was shortly followed by their first vinyl-only release on Fasten Musique called ‘Hoodlove’. The EP features 2 original cuts + a stunning remix by Romanian duo of the moment SIT (Cristi Cons and Vlad Caia) which was heavily supported by the likes of Petre Inspirescu, Sublee and many more.”
https://linktr.ee/Kozac
Boronas (We R The Aliens) GR
George Boronas is a Hamburg based DJ and producer.He began his career during the mid 90’s in Thessaloniki, Greece. Early influences came from his parent’s tape and record collection from Jean Michel Jarre, The Doors, Pink Floyd, David Bowie and many others. Some piano and guitar lessons were enough to make him realize his love for music and made him want to be a part of all that. He started Djing official from the age of 15 and with his unique top mixing skills and record collection he gained the reputation for appearances in festivals, parties, and events in various venues and clubs in Europe presented by famous Radio and TV shows.
For the past years, George Boronas & George Delkos are behind the project name “Square Room Heroes” with releases on many labels like Claap, Subsonic, Back n Forth, Exotic Refreshment and many others.
Working recently with Jakob Seidensticker (Wareika) and Snad were new horizons opened up and lead them to many releases to many well-known labels like Visionquest, Minibar, Pleasure Zone, Variete, Abartik, Roundqube, Local Raider and many others. In 2019 they start the “Mothership” project and all together with Melina create the “We R The Aliens” label.
https://boronasmusic.wixsite.com/boronasmusik
https://soundcloud.com/boronas
https://www.facebook.com/GBoronas/
https://www.instagram.com/george_boronas/
Antoine (Prism) GR
https://www.instagram.com/antoine.thedoctor/
Paul Grey (Prism) GR
https://www.instagram.com/pavlosgrey/
Visuals : Pixels On Space